The Danish language is said to be one of the hardest languages to learn. However I don't think that this is true, but a Dane is probably not the right person to answer that question.

It is a good idea to learn a couple of Danish words if you are going to Denmark on a holiday or moving to Denmark.

The Danish language is quite similar to the Swedish and Norwegian language, and is also influenced by other languages such as German, English and French.

Especially over the last 15-20 years a lot of English words are being used in Denmark. In Copenhagen it is very common to hear conversations in English in shops and on the street.

Denmark is only a little country, but there is a lot of difference in the dialect from one part of the country to another.

Even Danes can find it hard to understand dialects , especially in areas like part of the Southern Jutland peninsula or the North Western part of the peninsula and the island of Bornholm, mainly if you hear two locals having a conversation.

Most people in Denmark master the English Language, a lot of them to perfection and a lot of people speak German as well, especially in the southern part of Jutland.

If you walk in on somebody eating a meal in a Danish home or a canteen at work people say "Velbekom", It means enjoy your meal.

After a meal if somebody else is paying or someone else have prepared the meal it is common courtesy to say "Tak for mad" Thanks for the meal after the dinner or lunch.

Find the right translations in the Danish-English dictionary by entering a word in the search field.

You can enter both Danish and English words for

Useful words and phrases in Danish. 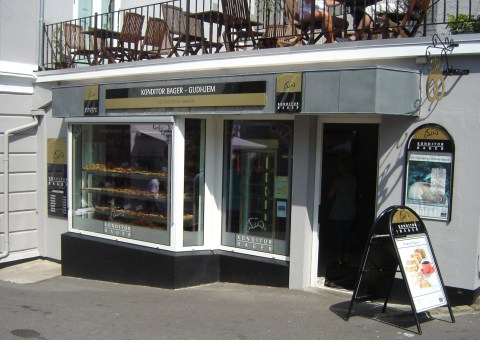 Bakery in Gudhjem on the island of Bornholm.