With a population just over 300,000 in Aarhus and 800,000 including the surrounding towns makes it the second largest city in Denmark and the “Capital of Jutland”. The town is situated on the east side of the middle part of the Jutland peninsula.

The town has a good railway connection to all parts of the country and is also connected to Copenhagen, with one of the fastest ferries in the world, the ferry is made in Perth, Western Australia.

The city has the highest percentage of young people in Denmark. Mainly due to the 35,000 students living in town and attending some of the 25 educational and research institutions Aarhus has to offer, if you take a walk along the river you will notice them at the many restaurants and cafés , and of course, around the University of Aarhus which are an architectural gem in the beautiful University Park.

Where the Cathedral today rises into the sky with its tower soaring to more than 95 meters in height, there has been found evidence which shows that there was a Viking settlement here, at the very same spot, as early as the 8th century.

1250 years ago, The “Bispetorv” square was also the center of the town, and in the basement of the Nordea Bank you will find The Viking Museum, you can here see a model of the Viking town which the Vikings built in Aarhus in the 10th century. Here you can see how the whole town was laid out. A typical family home was 50-60 square meters and each had their own little garden surrounded by a fence.

The Museum is open to the public when the Bank is open.

One major tourist attraction in the city is The Old Town, National Open Air Museum of Urban History ( in Danish, Den Gamle By ) which is not actually an old part of the city itself, but a collection of 75 historical houses, exhibitions, shops, and workshops gathered from all around the country.

From Easter to 30th December it is possible to experience Living History to a varied extent.

In The Old Town, Living History consists of activities where people in period costumes re-enact history to make it come alive. The keywords in Living History are imagination, activity and human contact.

Have a chat with the shoemaker's wife. Come and meet the shop-apprentice's, the town drummer and the many other characters of yesteryear's market towns. Pat the horses and see the chickens in the historical surroundings.

The trip to Aarhus is worth it just for The Old Town. The museum is a living experience of what it was like to live and work in a Danish market town, as it was in the old days.

Here you can experience a market town at the time of Hans Christian Andersen, where a fairytale awaits just around the corner. Meet the people and characters of yesteryear, experience life as it was in their kitchens and living rooms.

Try out the old children’s games, or go on an exploration in the museums exhibitions.

The Old Town is also the home of The Danish Poster Museum, which displays exhibitions throughout the year. Don't forget to visit the Danish Museum of Clocks and Watches and The Old Town’s toy museum.

There is also a traditional tea garden, historical shops and a large Museum shop.

The frigate is the longest wooden ship in the world.

You can here get an idea of how the life of the 437 men aboard was under the harsh conditions in the Danish Navy during the 19th century.

After the latest restoration the orlop deck almost appears as in 1862 when the frigate was new.

You can see how the living conditions were according to rank and the cramped space aboard for everyone, even the captain’s quarter.

During summer there are 2 guided tours daily and two cannon shows daily as well where one of the big guns is fired. There are also some kids activities for kids and the young at heart, like ships building and ropemaking.

You can find more information like opening hours and prices here.

One of the world’s first glass museums you will find here in Ebeltoft as well, and the area is one of Denmark’s tourist centers, due to the old town center and the beautiful area surrounding the town.

There are several thousand holiday homes in the area, and because of that, the population here is a lot higher during the summer months, and a lot of the people living in town also drive to Aarhus to work every day.

The city has over 16 hotels plus a number of Bed & Breakfast accommodations for you to choose from if you are staying here for a holiday, week-end or for a conference or meeting.

About 35 km north of Aarhus you will find a town called Randers, here you can visit a man made rainforest, actually they have 3 of them. (Africa, Asia and South America) all 3 of them created inside domes.

There are 250 animals and 450 different plants here and it is quite an experience to be walking inside the domes.

See the small monkeys jump from tree to tree and even feed them with melons if you are around at feeding time.

Most of the animals are free to range so it is quite similar to walking around in a real rainforest with temperatures at 28-30 degrees and a humidity at about 100%.

Randers also have the only Elvis Presley museum outside USA, Graceland-Randers. 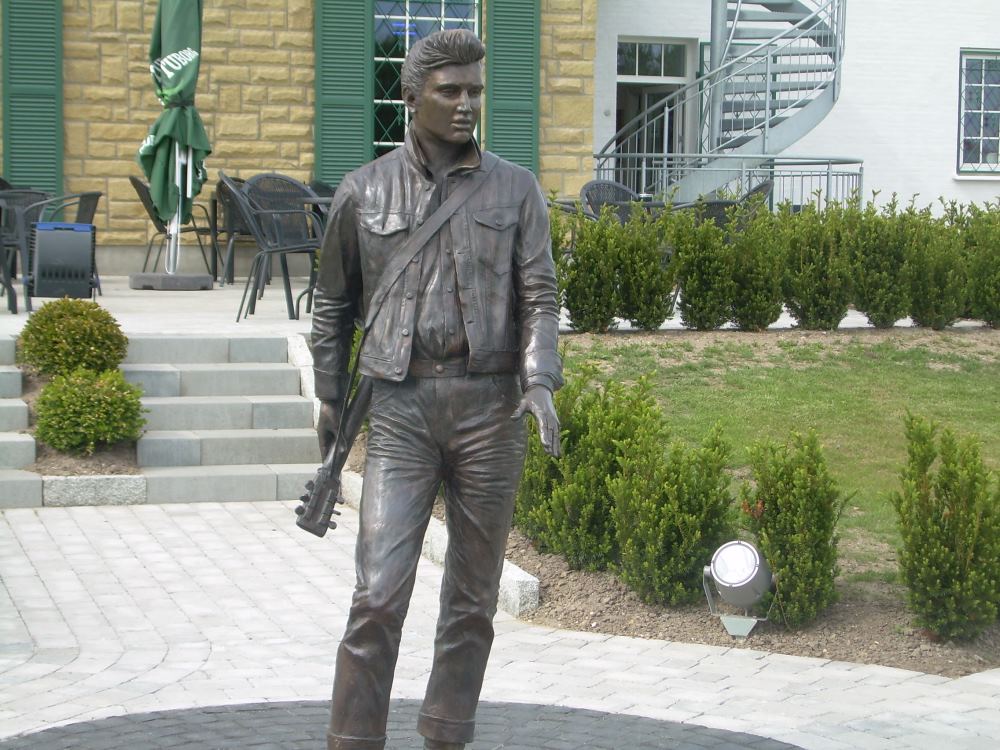 Links to towns on the peninsula!

Haderslev Take a look at the old town and take a tour on the inlet with the ferry Helene.

Ribe. See some of Denmarks oldest buildings in Denmark and visit the Viking Center.