The lovely island of Fuen!

The lovely island of Fuen (in Danish Fyn) with a size of just under 3000 km2,it is the main connection between the Jutland peninsula and Zealand if you travel by car or train. 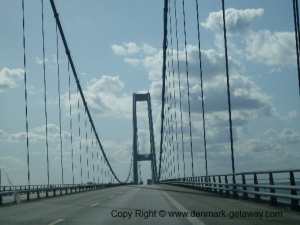 Zealand, Denmark's largest island, where you will find Copenhagen, and Fuen is connected by the Great Belt Bridge, the bridge was opened for trains in 1997 and for cars in 1998 and was the world's second largest bridge when opened.

The Great Belt Bridge consists of a 6611m combined road and railway low bridge with an average height at 18m above sea level and a 6790 meter long suspension bridge, the train goes into a tunnel, when the suspension bridge starts, the tunnel is 8024 meters long and lies between 12 and 40 meters under the ocean floor.

The two pylons on the suspension bridge are the highest points in Denmark with a height of 254m above sea level.

The number of vehicles using the bridge is about 1 million a month on average with most of the traffic in June and July.

The island has a population at about 450,000. The main town Odense is placed in the middle of the island, population just under 190,000 which makes it the third biggest city in Denmark, Odense is connected with channels to the sea.

There is more than 150 different nationalities living in Odense and over 16,000 students attend the town's universities.

What To See and Do!

Hans Christian Andersen was born in Odense and was living there till the age of 14, when he moved to Copenhagen. Today his childhood home has been made into a museum.

There is also an open air museum in town, called "Den Fynske Landsby", with ancient rural buildings, mainly from the island.

The second biggest shopping Centre in Denmark is located here in Odense too, "Rosengaardcentret" with 145 shops.

From late June to the end of August you can take an evening walk with the night watch man around the quarters where Hans Christian Andersen was living.

The watch man will tell you a bit about the local history and will sing the traditional hourly verses, there is one tour every night Monday to Saturday and the tour starts at the old pub in "Overgade" at 9pm.

Don't forget Odense Zoo when in town, this is one of Europe's most popular Zoo's and one of the most visited attractions in Odense.

Here they have made an African nature reserve, consisting of both marshland and savannah which is home to all the African animals such as monkeys, zebras, lions and some large African birds.

You will also find one of Europe's largest aquariums at the Zoo. 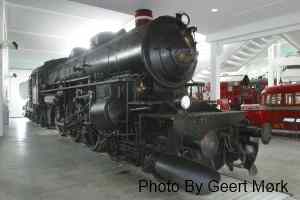 The Danish Railway museum has its home in Odense as well and I can recommend a visit here, especially if you are interested in trains.

Here they got huge locomotives where you can try out being on the footplate of the engine driver, have a look at the carriages for the royal, the rich and the poor.

Thomas the tank engine and play areas for the children you will find here as well.

You can find the Railway Museum at:
Danmarks Jernbanemuseum
Dannebrogsgade 24
5000 Odense C

The Saint Canute's Cathedral is also a visit worth, dating back to 1093 and rebuilt in the 13th century and again restored in 1852 and 1864.

The Cathedral has two skeletons, King Canute II and his brother Benedikt, on display in a glass case.

There are more than 15 hotels and over 11 B & B to choose from i Odense if you want to spend a couple of days, visiting H.C Andersen’s house or the old part of town or some of the castle around on the island. 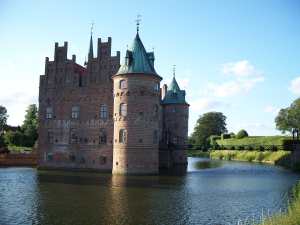 There are a lot of places that offer quiet areas where you can relax sit back and watch life go by, or go and explore the old part of town and all the old houses.

In a way you can call the island for a fairytale island, you got Hans Christian Andersen and his fairytales, Odense and Egeskov Castle with its ten museums, the enchanting doll's house "Titania Palace" and the most beautiful park in all of Denmark, defiantly worth a visit.

You can find Egeskov Castle in Kvaerndrup, south east of Odense, between Odense and Svenborg. A must see if you are on Fuen.

Apart from Egeskov Castle there are another 122 Castles and Manor houses on the island and about 30 of them are open to the public.

Here are just a few:

Fuen has 1130 km coast line and about 1200 km excellent routes for push bikes.

The main island offers you over 40 camping sites, mainly on the coast line all around the island. And another 13 on the small islands south of Fuen.

It is a paradise island for boat people with all the small islands surrounding Fuen, the normally calm waters and all the beautiful towns along the coast like Kerteminde, Nyborg, Svenborg, Faaborg, Assens, Midelfart and Bogense. All lovely towns, with a laid back lifestyle.