25 years used to be the main celebration but with many people getting married late or getting divorced and remarried, the 12 ½ year anniversary is sort of taking over as the bigger celebration today.

One of the Anniversary Traditions are that at the 3 main anniversaries 12 ½ , 25 and 50 years the neighbours, family and friends make an arch around the front door of the home where you are living, if it is a Copper Anniversary (12 ½ year) however it will only go half way.

The arch is put up during the evening before the anniversary and it is a tradition that in the early morning, between 6 and 7am., of the anniversary, family, friends and neighbors gather in front of the arched door most likely accompanied with some kind of music and start singing for the anniversary couple.

The anniversary couple thereafter invite all the singing guests in for breakfast after a couple of songs, they serve coffee, bread rolls and Danish pastry and most likely a couple of Old Danish Bitters.

Apart from the breakfast, family, friends and the closest neighbours are usually invited to a party, most likely in a hired hall or community hall where a three course meal are most likely to be served.

Some of the most used menus are.

Dessert: Ice-cream, fruit or some kind at mousse.

The drinks there are served are usually red or white wine.

Coffee is served later with a cognac or sherry and a piece of almond cake (kransekage). 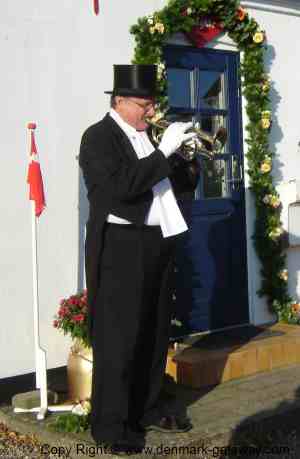 At a Danish Anniversary there are speeches and singing involved, homemade songs are personalised to the couple of the day and contain stories about their lives.
You can pay someone to make a song or you can make your own, the melodies used in the songs are always old and well known.

The songs are handed out and everybody is singing along.
It is quite common that there are anywhere between 5 - 10 songs during an anniversary party and sometimes it can take a fair bit of time to get through them all, and on top of that you have all the speeches.

Another one of the Danish anniversary traditions is to take the shoes off the groom and cut the toes off his socks or cut a piece off his tie.