The Danish birthday traditions, especially round birthdays, involve a lot of speeches and singing, homemade or shop bought sing-along's are handed out and everybody get into the singing.

It is quite common that there are anywhere between 5 - 10 songs during a round birthday party like a 50th birthday, sometimes it can take a fair bit of time to get through them all, and on top of that you have all the speeches.

The Danish flag is usually flagged on a birthday, if you don't have a flagpole is it common to use a mini flag and put it outside your front door.

At bigger Birthday parties you can expect a sit down dinner with a three course meal.

Some of the most used menus are.

Dessert: Ice-cream, fruit or some kind at mousse.

The drinks served are usually red or white wine.

Coffee is served later with a cognac or sherry and a piece of almond cake (kransekage), a typical Danish Birthday tradition.

If you turn 30 and you are still single, you will normally be in for a big party mainly with close friends.

An unmarried 30 year old male is called a "pepper man", in Danish (pebersvend)and a female a "pepper maid", in Danish (pebermø)and it is a tradition to place a big pepper mill in front of their home, usually made up from something like 2 or 3 old oil drums filled with concrete and decorated with a big number 30 on and it can be a bit of a task to get rid of it after your birthday.

The 50th and 60th Birthdays parties in Denmark can be celebrated two ways and some even celebrate the Birthday both ways.

One way is "open house" where you put an ad in the local paper and announce that there is an open house on your Birthday and people drop in over the course of the day, some may stay for most of the day and some only for a short time to wish you a good day.

This way you are likely to catch up with people you haven't seen for years, maybe people you worked with when you were 20 or 30 years old and haven’t seen since.

You will most likely serve a brunch between 7 am. and 2 pm. or a buffet starting later in the afternoon.

The other way is to hire a hall, book in at a restaurant or if you have enough space at home you can hire some people to serve the food at home.
It will most likely either be a 3 course meal or a Danish smorgasbord.

At a lot of these Birthday parties you will also see professional entertainment like a band or a pianist entertaining the guests.

At a child's first birthday it is common to give the child a birthday cake and let the child eat the cake by him or herself and see the joy on the child’s face while eating the cake.

It is also common to put the child’s birthday gifts around their bed, so that when they wake up they see the presents and get straight into unwrapping them.

What do you serve at a kid’s birthday party?

At a kids birthday party, especially if the whole family is attending you would usually serve sweet bunds with butter and jam or cheese, Danish pastry and a layered sponge cake or ice-cream.

A favourite birthday cake for kids 2 to 12 years old is the Cake man, in Danish "Kagemand". 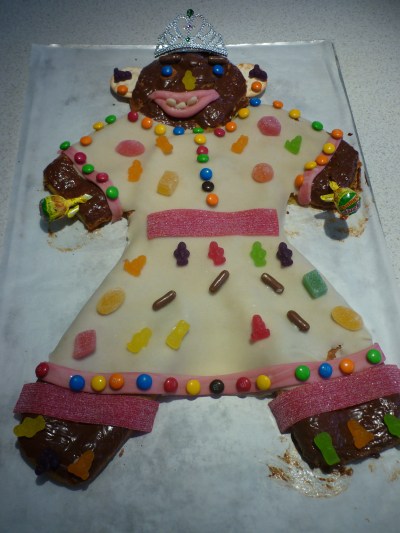 The cake man is usually made of Danish pastry or a sweet bun dough with a brown sugar and margarine mixture on top, called "Brunsviger" in Danish.
Brunsviger is a speciality from the island of Fuen but today available from bakeries in most parts of the country.

The cake man is decorated with cake marzipan and lollies and comes in the shape of a boy or girl.